Well we did it! We finally updated our website. We have been wanting to do it for two years now, but we have been so busy since we launched the brewery, that it always got pushed to the back-burner. So, what do you think..? We have tried to keep it simple & clean, and we’d like to know your thoughts. What else should our website have on it..?

Well, lot’s has happened in the last two and a half years. We’d first off like to thank everyone who has supported us and encouraged us over the last two years. We are constantly surprised and very grateful that you are willing to pick up our beer when there are so many other choices on the market. It’s because of this trust that we don’t want to let you down, and promise not to release anything onto the market unless we are really happy with it, and think it worthy.

So what are we working on right now..? Well we are finally filling some foudres with beer. You may remember that we bought a bunch of these large oak vats from France in the spring of 2014, and we are only now filling some of them. Our timing wasn’t the greatest, as we stored them empty all summer, causing them to dry out to the point where they no longer held liquid. Not good…

We have also spent several months building a separate room to put them in, and have just recently put them into position. They didn’t have any valves or proper manways, so we have had to modify them and add all the hardware we need to make them useful. Most importantly we have been rehydrating them – the long process of rinsing & filling with water so that the oak rehydrates and slowly expands back to a point where they are waterproof. Then comes the scrubbing, cleaning, and sanitizing, and eventually we fill them with beer.

When will these beers come out..? Good question. But the truth is we have no idea. We will hopefully start releasing some in 2015, but this process is new to us, so we have to be patient. As well as filling actual foudres with beer we are brewing a lot of small test batches too, trying out various recipes and Brettanomyces & bacteria strains – even some local ones! It takes a long time to get any feedback from these test batches, so we need to be careful how quickly we move forward. Some traditional breweries who specialize in this type of beer allow their beers to age for several years, but we hope to have some that we will be able to produce in under a year. It depends on a number of factors involved, but for now, we are trying to keep the process as simple as possible as we learn the ropes. So this is what we are most excited about at the moment, and just goes to show you that the craft beer journey is a constantly evolving one, and there is always so much to learn and enjoy along the way. 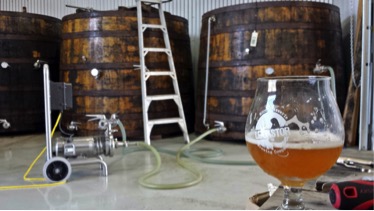 Related posts
At last, a Brett beer leaves the brewery…
May 1, 2015
BACK